At the bottom of this post is the Travel With Balls promo video that actress Khandi Alexander filmed for us while we were in New Orleans. Alexander was a regular on the hit show CSI Miami for six seasons and is currently starring as LaDonna Williams in Treme, HBO’s series about life in post-Katrina New Orleans.

It was only after we met Alexander in person that I realized what an amazing actress she is and what a transformation she undergoes for the role of LaDonna.  LaDonna is a tough, ’round-the-way sistah who owns a bar in a rough section of New Orleans.  Life for most residents of the city was constant hardship  in the months (and years) following Katrina but LaDonna’s burden is intensified even more by the disappearance of her brother in season one of Treme and by a brutal assault in season two.  As a result, the character of LaDonna seldom smiles.  Her face is a mask of tension and barely concealed rage.   Her jugular vein threatens to explode from her neck at any moment.

Khandi Alexander in the Role of LaDonna Williams on Treme

So imagine my surprise when we walk into the Lousiana Music Factory to meet the cast of the show and discover that the woman playing the role of LaDonna is, in reality, ebullient and joyful, with a dazzling smile that could power an entire city.   Simply amazing! 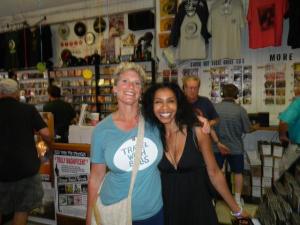 Now for the promo video — is it sweet, or what?!

← It’s the Weekend and We’re Feelin’ SO DAMN GOOD!!!
All Children Deserve the Right to Play! →