We’re back in Los Angeles, which means I have my trusty old laptop that inserts pictures into this blog, no problema!

The second weekend of New Orleans Jazz Fest was every bit as fun and funky as the first; there were so many incredible performances and peak moments that it’s impossible to do justice to them all.

Here are just a few of my favorites from second weekend:

Mavis Staples at the Gospel Tent.  Mavis, former lead singer of the Staples Singers, is in her early 70s now, but she still has “the voice,” the one that sounds like grits and grease and gravel all run together.  She was supposed to be performing her set with Levon Helm, the former lead singer of The Band, but Helm lost his battle with cancer just a couple of weeks before Jazz Fest.  Mavis brought the overflow audience to its feet with her soulful, impassioned rendition of Helm’s hit song, “The Weight,” (better known as “Take the Load Off Fanny”) and reduced everyone to simultaneous cheers and tears when she raised her fist to the sky after finishing, wiped the tears from her own cheeks and yelled, “Levon Helm!  Levon Helm!”

Mavis Staples at the Gospel Stage

Zac Brown Band at the Acura Stage.  It was the end of the day and the sun was sinking into some soft pink clouds on the horizon.   Most of the others stages had emptied out but there had to be 35,000 people packed shoulder to shoulder at this southern country/rock group’s set.   Arriving late (we had been watching Mavis Staples) we waded into the middle of the frenzy and let ourselves be swept up in the delirium when the band started playing their hit, “Chicken Fried.”  All around us, shirtless young men and halter-topped young women waved their beers in the air and sang the chorus at the top of their lungs, “A little bit of chicken fried, cold beer on a Friday night, a pair of jeans that fit just right, and the radio up…”  The mood was one of good-natured celebration and we couldn’t help bellowing along (even though we didn’t have any beers to wave and William kept his shirt on…).

Treme Filming at Fais-Do-Do Stage.  We had just finished watching the Jambalaya Cajun Band when the announcer asked people to stay put and serve as extras while they filmed a scene for next season’s Treme.  A stage-hand then put up a new sign at the edge of the stage: Annie T & the Bayou Cadillacs.  I couldn’t believe it — art imitating life was now life imitating art.  Treme is a fictional TV series that depicts life in New Orleans post-Katrina.  Now one of the characters from the show, Annie T, was going to actually be performing a couple of songs at Jazz Fest so that they could include it in an upcoming episode.  It was too bizarre!  But here came actress/musician Lucia Micarelli, violin in hand as she strode up to the mic.  She first played a fast song on fiddle and then sang a heartbreakingly beautiful ballad entitled “This City Will Never Drown.”  At the end, I wasn’t cheering only because I got to serve as an extra for my all-time favorite show (well, it’s the ONLY one I’ve watched in seven years…) but also because her performance was so riveting.  Annie/Lucia — you ROCKED it!

Wendell Brunious & The Jazz Masters at the Economy Hall Jazz Tent.  The traditional jazz that put New Orleans on the musical map isn’t much in vogue these days — this venue that features Dixieland brass bands and ragtime is among the smallest at Jazz Fest — but the music has lost none of its power or punch for its aficionados.  Brunious, a handsome, dapper trumpeter who has been around for decades, teamed up with Dr. Michael White — a walking encyclopedia of traditional jazz and a virtuoso clarinetist — and a host of other old-time professionals to deliver a spirited set that set dozens of folks to second-lining almost from the start.  Once the trumpets and trombones were wailing out came the parasols and the hankies and the aisles filled with happy dancers waving both around as they strutted through the tent.  I was one of them.  I must have looked pretty funny in my Travel With Balls t-shirt, jauntily snapping my bandanna in the air to the rhythms as sweat poured down my face and a maniacal, ear-to-ear grin of ecstasy showed off every last one of my upper teeth… 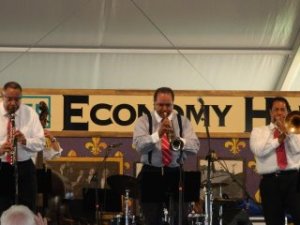 Wendell Brunious & The Music Masters Tearin’ It Up

Hot & Sweaty But Happy As Hell As I Second Line!

John Boutté at the Jazz Tent.  Don’t let this man’s diminutive size — he’s several inches short of 5 feet — fool you:  he’s got a giant soul, an expansive spirit and an enormous vocal genius that is capable of expressing the most nuanced emotions through his incredible phrasing.  Before watching his set I had only known Boutté as the writer and singer of the up-tempo theme song for the HBO series Treme.  But through his sensitive interpretations of These Blue Days and Lush Life I learned of his gift for ballads.  And the last fifteen minutes of his performance were among the best I have ever heard from ANY singing artist: his rendition of Leonard Cohen’s classic, Hallelujah, (he included all the verses) was so profound I was covered in goose-bumps and tears.  (I wasn’t the only one — I looked around and saw many others in the overcrowded tent dabbing at their eyes…)  After he recovered from the emotion of that song (he, too, broke down afterwards), he donned a flashy jacket, scooped up a tambourine and led everyone in a joyous version of Treme that had people singing and dancing in the aisles.

John Bouttte performing the most soulful version of Hallelujah EVER!

I could just have easily talked about the amazing performances of Bonnie Raitt, Henry Butler, Ziggy Marley, Little Freddie King, Allen Toussaint or The Neville Brothers but I’d be writing for days if I tried to capture everything wonderful about the second weekend.  (The one performance I wouldn’t bother talking about would be The Eagles.  The songs still sound great, their harmonies are still tight, but their two hour set was without any real zest or joy; it was as if they were just grinding through another stop on their tour.  At Jazz Fest, where even a superstar  like Bruce Springsteen expresses his enthusiasm and excitement about being part of the experience by crowd-surfing, changing some of his lyrics to mention New Orleans and bringing out Dr. John to jam with him, a lackadaisical, workmanlike attitude simply doesn’t cut  it…)

While we were totally immersed in the music at Jazz Fest, we also took care of TWB business — we gave out a lot of cards and spoke to a lot of people (some of them were even sober at the time!).  Hopefully, the seeds we’re sowing now will result in a crop of soccer balls being given away in the future…

Okay, that’s it for now.  In another couple of days I’ll blog about our last day in New Orleans and then I’ll probably do a wrap-up essay about the whole experience.

← For TWB — It Don’t Get No Sweeter Than Khandi!
A Final Day in New Orleans →