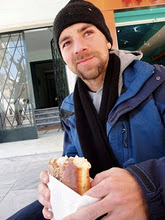 Yesterday, we showed you the video of Jeff Knoche’s TWB score in Albania.  If you haven’t seen it,  view it here – http://www.youtube.com/watch?v=DqHpdNSDXaA

Now for the Player of the Game’s stats:

Jeff, a California native who attended USC as an undergraduate (I’m a UCLA alumnus, but since Jeff’s TWB score was so damn beautiful I’ll attribute his poor choice of universities to innocent youthful error…), has been a Peace Corps volunteer in Gramsh, Albania for the last 18 months. His current efforts there include constructing a playground for children in the town’s center and launching a soccer program for both boys and girls. The TWB score took place when Jeff was traveling through the Albanian countryside on one of his weekends off.

You can check out Jeff’s Albania activities on his well-written blog that includes some great pictures. http://www.calbania.blogspot.com/

Jeff caught the travel bug when he took his first trip outside of the States to India in 2008. Since then he has been to Rwanda, Greece, Bulgaria, Romania, Macedonia and Turkey. His favorite part of visiting any country, he writes, is “soaking in the culture and the people.”

Jeff’s Peace Corps stint ends in another six months. He has already been accepted into the graduate school programs for business at UC Davis and UC Irvine, and is awaiting a response from, cough, USC.   Regardless of where he ends up getting his MBA from, Jeff is already certain of one thing — travel to other countries will always make up an important part of his life.